It has almost been two months since we arrived to Puerto Rico and the weeks have just flown by. I’ve been busy trying to sort my life out and trying to get the necessities organised – such as somewhere to live and a car but these things have proved to be such a battle at times. Being honest I’ve thought about coming on here and blogging about news on a house that we were ready to sign a contract on and potential beautiful homes that we loved but it would have been pointless… as we have fallen at every hurdle.

I don’t  have much nice things to say about the realtors that I have come into contact with. We were ready to sign a contract on a home we were happy with and due to move in on July 1st. We heard nothing to make us think that this wasn’t the situation until the relocation company phoned us to tell us that they had arranged more viewings for us as the home owners had decided not to rent to us anymore. The realtor had shown the house to someone else and they had put in a higher offer. I was devastated. We phone other realtors and made appointments to view more properties and two of those realtors cancelled appointments within an hour of the viewings. We felt like we were being shunned because the realtor who was supposed to be looking for us and was unsuccessfully sourcing options was telling them not to deal with us. Eventually we seen another home that we loved in Sabanera area which wouldn’t be available until mid September. As we are travelling home to Ireland for a few weeks soon we decided that this was our best option as we really loved the house. We asked for the contract. And then we waited. And waited. Two weeks later we got a phone call to say that the owner had made a mistake with the current tenants and now the house wouldn’t be available until mid October. Bearing in mind that Rob first came here in March and began looking at houses it seems ridiculous that we still haven’t found anywhere.

A lot of the problem seems to be down to greedy realtors. One house has been available since February and Rob viewed it in March. It’s $1,000 over our budget and we have asked the owner to negotiate. It’s over priced for the area. She wont consider it. At this point she would have made up the difference for the duration of a potential tenancy but still won’t budge on it. It just doesn’t make financial sense!

Anyway, as I sit here tonight we are waiting to hear if another house is going to be an option for us. I’m over getting stressed about it. If this house comes through then that will be amazing and we can move in the end of August. If not, then it wasn’t meant to be. We will stay in our temporary accommodation until October and take the house in Sabanera. I’m leaving this one to fate to decide. Whatever happens, it will be the home that we were  meant to live in.

On to the car hunt. We thought this would be a simple job. One day should do it! We went on a Saturday morning with baby in tow on the route 2 and seen how many dealers there were and thought yes, we can pick up something easy! WRONG! We drove and stopped at almost every dealer from Dorado to the other side of Arrecibo. First of all it’s not easy to do with a baby and second of all its so difficult to know who to trust. We weren’t taking out finance on a car so wanted to buy something a couple of years old with low mileage that hadn’t been crashed. Everyone was pushy and bumping up prices and trying to force us into taking finance. We went home with a tired and cranky  baby and we were exhausted. So, we were to venture again the next Saturday and decided to leave Michael with the sitter and to drive the other direction to San Juan. It was in a dealer in Bayamon that I spotted a lovely Mitsubishi ASX Sport – its a crossover, not quite the big SUV but not a saloon. Nice and high off the road for the pot holes and speed bumps! This car needed to be serviced so we asked the dealer to do that and we would come back and test drive it then. We went to another Mitsubishi dealer and asked did they have one.  They did but brought us to a Nissan dealer to view it… but they spent 40 minutes on the phone calling other dealers trying to find one and then pretended that they had it the whole time. However it got there, it was beautiful! And we put in an offer and the salesman accepted it and we shook hands. We went to go and sign the paperwork and we takes a call from someone who said that he needs to sell it for $2000 more than we had agreed. At this point we left, just annoyed that he had agreed to something without the authority to do it. We went home shocked that another day had passed and we hadn’t bought anything.

Another Saturday, another day on route 2 while we both would rather be at home with our child. We had pre arranged viewings with a number of dealers to look at ASX models and most didn’t have the cars that they said that they did on the phone. One produced a Mitsubishi Lancer and told me that it was that car that I had called him about and another tried to sell me a 2011 as a 2013 model. Thankfully I had done a carfax report and knew when to leave. So, in the end we had to swallow our pride and go back and pay the extra $2000 for the one we had seen the previous week. It was a bit of an ordeal but we got there in the end and at least now I can leave the house! Freedom is certainly great when you have a baby that is teething and not sleeping and is feeling cooped up in the house. 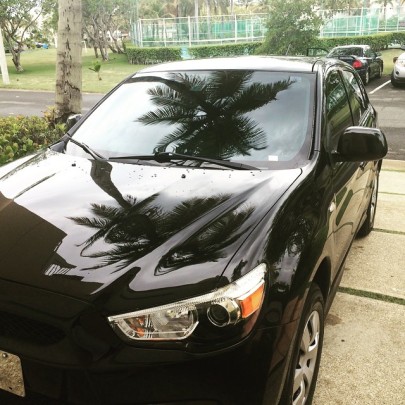 Having mobility has allowed me to get around and meet some people. We have a lovely sitter that takes Michael on a Saturday night after we put him to bed so we have been lucky to get out together for dinner and drinks and to be able to do the same with other couples and try to make friends. I’ve met some great Mom’s with kids similar ages (some are actually Irish), so that has been a blessing. It seems that your close friends here become your honorary family – the people that are your support system when you need something. I’m looking forward to seeing how those relationships progress over the coming months.

While parts of getting set up have been difficult and frustrating, all in all I’ve enjoyed it so far. I love being at home with Michael, he has gotten so big and grown up in such a short space of time. In the past two weeks he is crawling, standing, waving, giving hi 5’s, climbing and in general is just a joy to be around. It’s great that he is progressing and amazing to be at home to see it! We have more of a routine now which involves me getting to workout during his morning nap when we are at home on those days and read and sun bathe during the afternoon nap. I’m very grateful for that time for myself. We go to pool here in the complex at the weekends and during the weeks sometimes and  spend more time together as a family than we would probably get at home in Ireland. I’ve started with a personal trainer twice a week which is an outlet to get out of the house and have some time alone. Michael has a sitter for those two hours and he loves her!

Rob had the first week in July off and unfortunately while we had planned on leaving Dorado and seeing more of Puerto Rico it didn’t happen. We were busy setting up bank accounts and buying the car and getting set up with phones, registering with Costco and then I got sick. Then Rob got sick. Then Michael. We were disappointed not to get more time to explore during that week but it was nice having some extra family time. I think Rob went back to work for the break as he realized how hard it is to be at home with an almost 1 year old and how much work they are. I had heard stories about safety elements here and while last week in Dorado there were two carjacking incidents at our local petrol/gas station we feel that once you have your wits about you and are careful it is a very safe place to live. My debit card has been stolen and my credit card duplicated though. Which is more of a huge inconvenience as they’re from my Irish bank account.

We go home to Ireland next week and it will be great to see family and friends. We have an action planned trip ahead which includes a birth, a wedding, Michael’s first birthday, our wedding anniversary, a baptism, a joint birthday party for 30 1 year olds, wedding dress shopping with one of my oldest friends and the first anniversary since my Mum passed away. The past year has gone by so quickly, she would have been looking forward to us coming home and seeing her grandson. We arrive at 9am into Ireland and I know if she was there she would be at the airport to meet us and breakfast on the table for when we got to the house.

So there you have it. The past two months hasn’t seen much progression but this oven that we call home is starting to feel less like a strange place and more normal. I’m looking forward to having a home and putting down some roots so that we can enjoy this experience more and feel more at home!

One thought on “Where do the weeks go?”