I promised a while back that I would get out of Dorado more and see what else the island had to offer. Things have been super busy to be honest but we have done some more exploring.

We had family visiting in early November so we booked a day snorkelling upon the lovely Erin go Brath. It had been recommended to us and it really didn’t disappoint. I’m not a swimmer at all – I can’t stand water on my face and I really wasn’t sure that I would snorkel but after talking to the crew I felt fully assured that I would perfectly safe in the water with a life vest and gave it a try.

The boat docked from Fajardo and that part of the island is just so beautiful. We were under a little time pressure that day so we didn’t stop to eat etc there but we will definitely go back. Hopefully when we finally get to go to Bio Bay and explore!

It’s bad that I can’t remember the name of the island that we sailed to but it was deserted. It used to be used by the military so the actual beach had some signs saying not to go further into the trees due to explosives!  All eight of us, including 3 kids under 15 snorkelled together to a reef and saw some great fish. The captain said that you would often see baby turtles etc in this part but we didn’t on that day. At lunch time we had a bbq cooked on board which was amazing after a morning in the water. I didn’t participate in the afternoon snorkel but the others went with one of the crew as he wanted to guide them to a different part. They had a ball! I haven’t looked at prices of charter boats so I don’t know how it fares comparatively but this worked out at $130pp excluding taxes. I think it can take up to 8 people and you can rent it exclusively like we did for $700-$1000 depending on the time of the year.

More information can be found at http://www.egbc.net/index.shtml 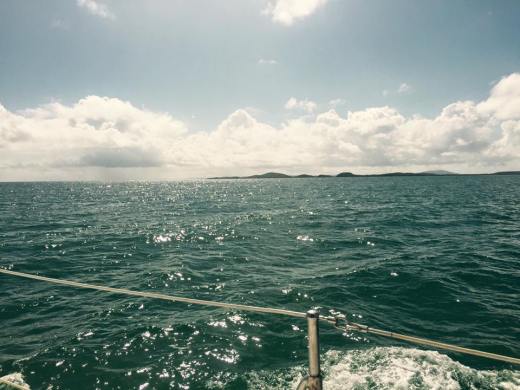 A few months back there was an online charity auction for the local library here in Dorado. We couldn’t attend the fundraising event on the night so we decided to bid on some of the items to support it. This item seemed like the ideal way to get out of Dorado and see more of Puerto Rico – from the air!! We bid on a helicopter tour of the borinquen shore of which flew over the beautiful north coast and Isla Verde. We had great views of Old San Juan and I have to say it was great. The guide was really informative. I thought I would be more nervous about flying but it was pretty cool! It would be something I would definitely recommend to people to try out. It’s pretty short – about 15 mins – but you see a lot and if you’re like me and hesitant about flying then it’s perfect. It was so beautiful and really shows San Juan in a fantastic light. Cost is $140 per person and there is a couple of different tours that you can try.

Company was http://puertoricohelitours.com/en/  and they have really excellent trip advisor ratings. 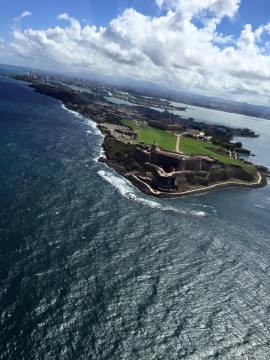 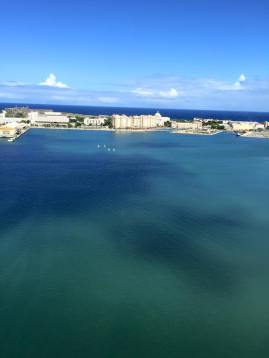 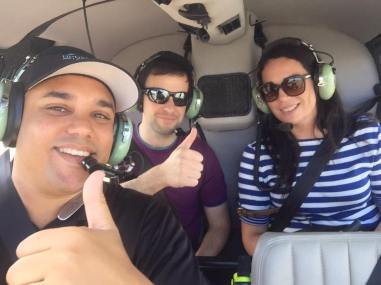 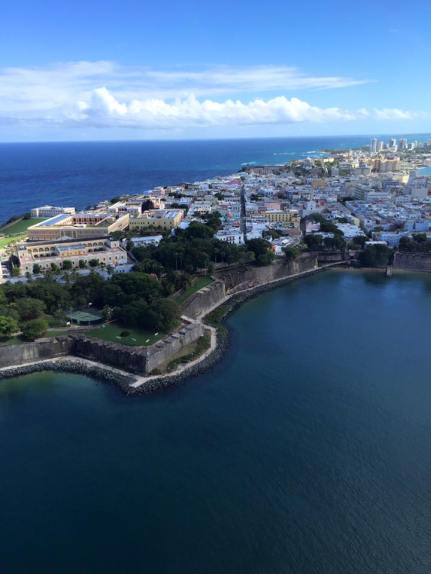 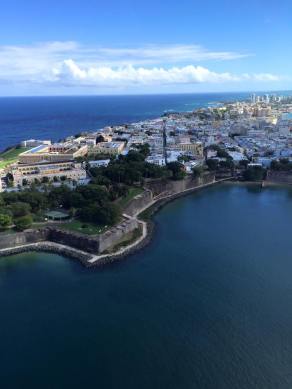 We took the advantage of a babysitter on a Saturday after the helicopter ride and went for a stroll in Old San Juan and had the most amazing Tapas in a little place called Pirilo. I think this its best known for pizza but it was fabulous and I’ve heard a rumour since that they’re opening in Dorado too so I would more than welcome that. It was a little hot for the walk at Midday so the cocktails there were a nice refreshing treat! This is also why I have no pictures of these amazing food or drinks… we were too hungry to wait to take any!

When my sister and her family were visiting it was also her birthday. She’s a little bit of a Bacardi fan (she could have shares in it!!) so luckily the home of Bacardi is here in Puerto Rico. We decided to do a mixology tour which includes a drink at the bar upon arrival, the historical tour of the factory and then a mixology class where we learnt how to make Mojitos, the Culebra and a Daiquiri. I really enjoyed this. Both myself and Rob were driving so my sister and her husband had to drink our drinks too so they really enjoyed it! It was a great laugh and as part of a bigger group the guide was really good at making it fun for everyone. I didn’t think that the boys would enjoy it and they both really did. Rob has now perfected the mojito and it’s our current drink of choice at home too! There’s a cool gift shop at the end and Bacardi is slightly cheaper there than in the supermarket but they have some cool novelty items and we got some cocktail shakers etc.

Price was $45 excluding taxes per person and it lasted about two hours. 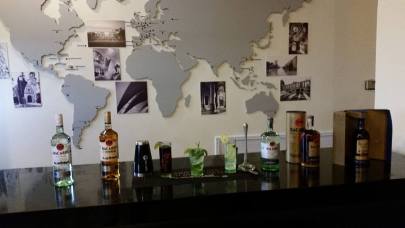 So we have finally left Dorado and have explored some of the tourist things to do and see. Next I think we will head the other direction towards Arecibo and beyond – maybe to Ponce to find things to do. We are going home to Ireland now in less than two weeks and we are so excited to catch up with our friends and family. We have some guests here in March so I’m sure there will be lots more exploring to do then!