I partly feel like I’ve no right to write on this topic because we only have one child. I see lots of people flying with 2/3 kids on a regular basis and I take my hat off to them. Flying with one is hard. Flying with three kids under 5 is like undertaking a special mission.

Flying as an expat is different to flying on your annual holiday. In most cases you will be flying multiple times a year depending on what family events you need to trek home for. It’s also common, not always, for expats to fly in business class when it’s available as one of the perks. This brings its own challenges. Trust me! Business class is lovely for the extra space and the opportunity to lie down on a long flight.. But what if you’re travelling with a teething 8 month old that refuses to sleep and is crying and you’re worried that it’s upsetting the other passengers who have paid an extortionate fee for some extra comfort on their flight?

We have been on over 20 flights with Michael in the two and a half years that he’s been in this world and this is my advice to anyone that has to fly regularly with kids.

And most of all…. RELAX! I repeat to myself constantly when travelling that this will pass. It’s just one day. One long day that you have to get through and you’ll get through it. It’s always worth it to see family on the other side! 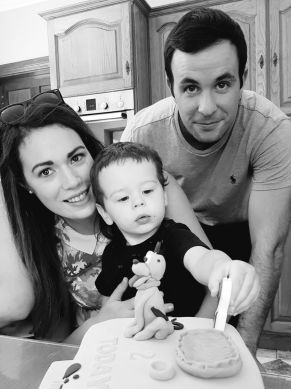 When we decided to take this expat assignment Michael was still  a baby. He was only 5 months old when we first started discussing a potential move. We really weren’t thinking about what it would be like to have a child abroad as we thought we would be home in two years and that he would be back in Ireland before we would have to think about education, pre school or starting activities.

He has gone from a chubby cheeky baby to a toddler in the blink of an eye and is now constantly putting on his shoes looking to go outside or to a friends house. He’s bored of Mammy and being stuck in the house. So we looked at our options and decided that Tasis, the international school here in Dorado was the best option for him when he turns three. So he will start Pre Pre K there this august. I’m sure I’ll discuss that in further detail in future posts but for now I would like to focus on healthcare while abroad with kids.

I thought moving here that once we could keep up with his vaccinations and that he had a good pediatrician locally then we were ticking all the boxes. Please keep in mind that as a first time mother I also didn’t know at that point about how much you worry about all the sniffles and coughs and fevers and how much at times I would wish that we had access to a Care Doc system that exists in Ireland. The Irish health care system leaves a lot to be desired at times but it does allow accessible health care to the majority and the Drugs Payment Scheme means that medication is available in lots of cases at a reasonable cost.

Last summer I travelled alone to Ireland with Michael as Rob was tied up here with work. We were home about a week when I went to Galway to visit Rob’s family. On the first morning there I woke up and went to dress him and discovered a rash over his legs. I immediately thought chicken pox but after consulting with a couple of people I was told that they should start on his torso. So I made an appointment with the local GP and I expected to be told that he perhaps had hand, foot and mouth or chicken pox. At this point his hands, knees and ankles were swollen and retaining fluid. The GP advised us after the consultation to go to the A&E dept of UCHG. We were admitted and after stumping a few doctors and some blood work Michael was diagnosed with HSP – an autoimmune condition. He hadn’t been eating well for a couple of weeks and this condition can be brought on by prolonged respiratory infections and he had a mild cough for about a week before we travelled.

This was a bit of a scary situation – mainly because I was away from my husband and it took a while for a diagnosis while doctors are discussing a lumpapuncture, meningitis and liver function but also because I didn’t know the facts about my health insurance. I no longer had VHI and instead had Cigna, international health insurance. The hospital didn’t know if we should be in a private room or if treatment was covered and neither did I. I was charged a larger fee for being admitted through A&E because I wasn’t an Irish resident. It was just more stress on top of being stressed.

It all worked out and we were covered and Cigna paid the hospital bill directly but I was angry at myself for not knowing the facts prior to being admitted. I should have known who to talk to and have the information and paperwork to back it up when on an international trip.

Since then Michael has been prone to colds, fevers and recently a viral infection. If you’re an expat and have kids abroad then you will know how difficult this is. Not only do you not have family close as a sounding board for when to take action but because I don’t speak spanish I have been petrified about having to attend a Puerto Rican hospital.

I have discovered a fantastic service. Michael’s pediatric doctor takes home care appointments and will come to the house for his check ups and yesterday came to check out a persistent rash that he has had due to this viral infection. He had a tech from a local laboratory come to the house afterwards and take a CBC and urine tests. It’s such reassurance as they spoke english and were able to explain everything while I got to keep Michael at home and distract him with his own comforts while being examined and having the bloods taken.

It takes a while to get settled in another country and learn that these services exist. My advice to any expat, particularly with kids, is to have all the documents regarding your health insurance that you need kept together. Be able to show it to a hospital either in your host country or when visiting home should you need to. Alleviate the stress should you end up in a situation where you need to avail of hospital services.

Ask questions… to other moms, doctors, forums, anyone who has lived in your new location and has had to avail of services. Keep all of the information together and don’t have to go and ask the questions when it’s an emergency situation and you’re already stressed. Know your way to the hospital, be able to drive yourself there. Do your research. Michael’s pediatrician is also based here in a hospital and that will be our first point of call should he need hospital care here. All of this was information that I got from other mom’s. You can learn so much from others who have undertaken a similar assignment when you just ask the questions and listen to the answers.